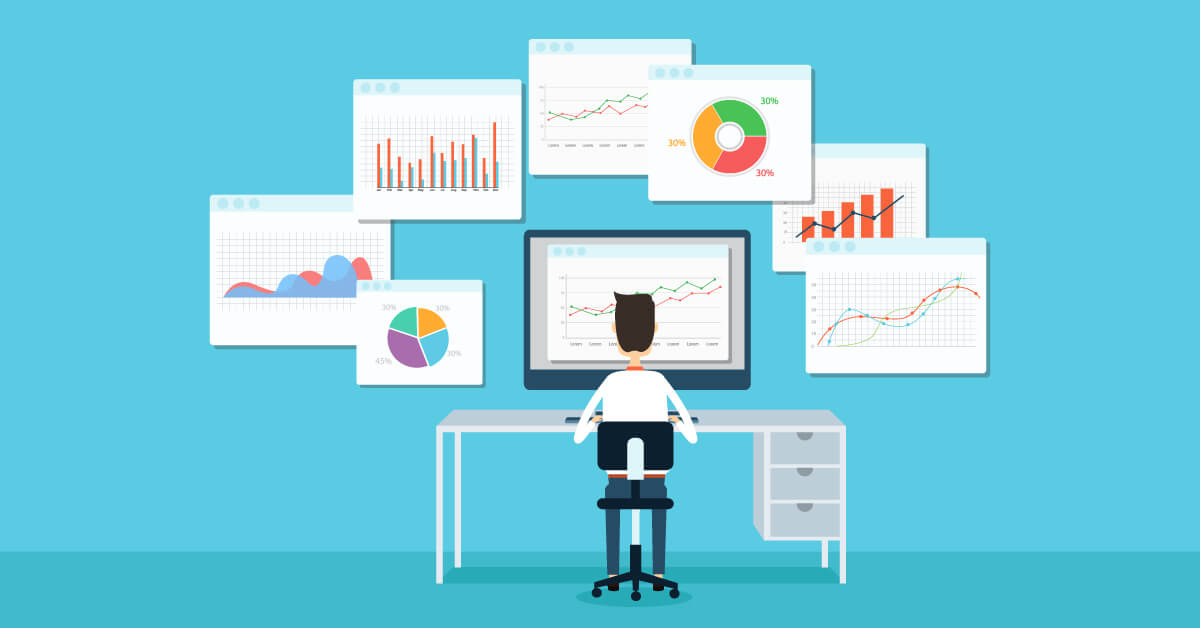 You have worked harder than ever to extract the analytical insights from a given dataset Following a presentation, your customers reject your analysis, saying that the reports weren’t legible enough. Now, you are wondering what went wrong with your strategies?

Well, a possible reason can be that your jargonized reports didn’t entail understandable visualizations. Unarguably, you can infer that knowing about graphical aspects can make or break your analytics campaign. But where to begin learning data visualization for analytics? Graphs are what you should be looking at in the beginning. So, let’s explore the different types of charts with appropriate use-cases below.

Also known as vertical bar charts, the column chart displays data most crisply. Each category is displayed using columnar bars with the vertical heights depicting their values. You can use these charts to make comprehensible comparisons in your report.

Do you want to contrast the look-alike data groups corresponding to different classes? If yes, then the bar graph can be your savior visualization. It combines multiple datasets associated with various categories and displays their values through their heights.

The stacked bar graphs are a modernized version of the conventional bar charts. In stacked bar graphs, the vertical bars in standard bar charts are stacked end-to-end according to a specific category. The fractional length of the bars represents the quantity of each data in the particular class.

You can compare the overall movement of a category variable with the other variable using an area chart. These charts combine the line and bar graphs and distinguish the progress across different categories.

If you wish to contrast two variables in a single chart, then the dual-axis graph can be a good fit. You can represent one variable using a column chart and the other with a line chart for better visibility. For example, you can leverage a dual-axis graph to compare company sales and profits using column and line graphs.

A line graph is a foundational graph visualizing a variable corresponding to the other using straight lines. For example, you can point-out a nation’s number of new COVID-19 cases on one axis and the dates on the other. Finally, you need to join all the points to obtain a neat line graph.

A Mekko chart gives you the power of visualizing in two-dimensions. It is a stacked column chart, having varying widths of each column. So, you need to consider three entities to draw a Mekko chart. Consider the sales data from some businesses. In a Mekko chart, the column width represents several companies’ sales data, and the stacked fragments depict various regions.

A pie chart is a circular picturization of similar data having different values using slices. The slices in a pie chart represent the variable sizes.  You can display the share values of various companies using a pie chart.

You can depict the change in initial and final values and the intermediate variations involved using a waterfall chart. Consider a business selling fresh tomatoes. Initially, they had some units of the grocery and sold a little lesser quantity. Understandably, some pieces might have got damaged and discarded. So, you can display all three events serially using column charts.

Bubble chart handles the three-dimensional visualizations efficiently. The bubble center coordinates depict two associated values. On the other hand, the size of the bubble represents the third variable graphically. You can plot a circle at the intersection of crime events and unemployment where the bubble size illustrates the populations in different regions.

A scatter plot chart is a line graph with the lines missing. You plot the points for two associated values and observe the correlation between them.

Using a funnel chart, you can represent the revenues generated in each sales phase. A well-shaped triangle implies a flawless workflow, whereas a distorted one indicates improper operations.

The heat map plots two variables in a chart, and the color-coding implies some meaningful insights. For example, you can use the heat map to present the daily temperature-variations of the given cities. Then, you can mark the hot and cold days in red and blue colors separately.

The above quick explanation must have overviewed all the charts for visualizing data in analytics. Hereafter, all you need is extensive practicing to master the plotting configurations and present your reports more elaborately.